IKG had their first ever debate against PMHG on Wednesday 14th May. The debate took place in PMHG and IKG were proposing that Whatsapp should be banned. The team focused on the dangers associated with Whatsapp.

First speaker Mirjam Bogner told the audience how their personal information is not safe when it comes to Whatsapp particularly in light of the recent Facebook deal. She also spoke about how Whatsapp is replacing meaningful face to face communication. Second speaker Christian Nachtrodt spoke about how Whatsapp is helping organised crime and our final speaker Alexander Dosch criticised the arguments of the opposition in particular their argument that Whatsapp was no riskier than any other social media apps.  PMHG on the other hand focused on how Whatsapp is more practical and cheaper than other forms of communication.

After a very interesting and entertaining debate, the judges left to room to deliberate and more than 30 minutes they returned with the news that when they had added up the scores the teams had finished level. The judges eventually decided to award the victory to PMHG. However they still had plenty of praise of IKG in particular for their strong arguments and rebuttals. Christian Nachtrodt was the highest scoring speaker for the whole debate. The whole team should be very proud of their performance in what was their first ever competitive debate. 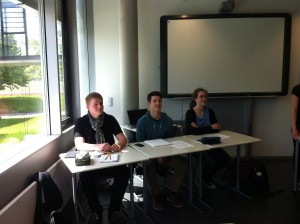